Ever want to be immortalized in a game system? Here is your chance….

Here is your chance to have a character, a major settlement, a military unit, a planet or planetary system, and yes…even a model named after you or given a name of your choosing. (Pending Approval).

I could lock myself away and develop Iron-Core in a vacuum, but I prefer to hear other viewpoints and receive input from the community that will be using this system. I will post rules sections on the forum for review, any input that ultimately ends up in the game will earn the poster -Contribution Points-. When the game goes to beta testing the contributors will be notified as to what level they have earned and will be given the choice to use either their name or a fictional name of their making.

The contributors may then submit three names (I will choose one of the three) that will be used to name a character, a major settlement, a military unit, a planet or planetary system and even a model, created or yet to be created. Naming a model will be reserved for those who have made many or major contributions to the Iron-Core universe or game system. Contributions can be as small as catching typos or as large as sweeping changes to the game system.

Play testers: When the game goes beta, I will open the Contribution Point system one last time. Any changes to the game system or astute observations about rule sections in your play test reports will earn you points towards immortality and one last shot at naming game assets.

As with all contributions, they must be given freely without expectation of financial or other reward. The goal is to make a game system that can be enjoyed by all; your reward will be the satisfaction of knowing you contributed to something that brings enjoyment to the gaming community, and perhaps bragging rights to the name of a game asset.

I look forward to your participation and hope that the completed game is one that you find enjoyable.

All the best,
Mark Mondragon

Forum Link
Posted by Mark Mondragon at 9:42 AM No comments:

Many of you know John from his amazing cad work, designing models for Rebel Minis, MERCS and many others.


Did you know he is also a writer? He worked long and hard on a pulp sci-fi project back in 2008. John is now a published author. You can find his literary genius here...
Mars McCoy-Space Ranger Volume One  for the bargain price of $3.00 PDF format. 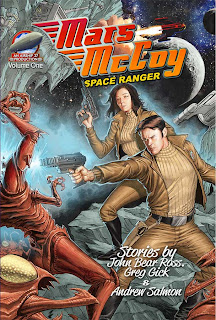 ﻿
Support the artists you enjoy or lose art altogether.
Posted by Mark Mondragon at 4:38 PM 1 comment:

With the (hopefully soon) beta testing of Iron-Core it was time to open a forum.
You can find the forum here
Why a forum when I have a blog? A blog is a great place to post news but when you need feedback or a place to ask and answer more in depth questions, a forum is a far better tool. It also allows me to email all my members with important news such as pre-orders and new product information as well as special offers.
Although the forum is primarily designed for DreamForge products, you are free to discuss any games or minis. As the discussions grow, I will tweak or add boards to allow for easy searches and updates. It has been some time since DreamForge had a forum and I miss the communal exchange of ideas and feedback. The members of the old forum helped to shape Iron-Core and it is my hope that this communal effort will continue and enrich the Iron-Core universe.
Will I still update the Blog? Absolutely! It is still the best place to check for up to the minuet news.
The main DFG website received a face-lift with some new art on the home page and the forum, to give a cohesive design.
Registration is simple and what you are used to. There is one extra step involved after you confirm your email, you will need to log in and review the Terms of Use board and reply to the thread with “Agree” in the reply title if you agree with the terms.  Also, take some time to tell everyone about yourself. Once you have Agreed to the Terms of Use you will have full access to all the forums topics and freedoms.
If you do not agree with the terms, you may still visit as a guest but may not post to the forum and you will not be part of the mailing list.
I hope you make yourselves at home…
Posted by Mark Mondragon at 5:50 PM No comments: