Just a heads up, I am still casting the Mortis. I have been busy locating a contract caster and have had some success. I will post any available Mortis models here soooo, if you want one of the limited edition models keep your eyes peeled to this blog.
Now on to some concept art.
I wanted to make something for the Protectorate that was immediately identifiable as Soviet era military but with updates to make it sci-fi. The problem with today’s military, is that forces from around the world look strikingly similar when it comes to body armor. Their weapons and camouflage patterns are often the only real visual clue as to the country of origin. In the Iron-Core universe, the factions are separated and evolved distinctively from one another. I felt it was important to keep their visual roots intact while updating the equipment.
In this concept I gave a big nod to the Soviet era by taking some distinctively Soviet traits and  turning them into design cues. I turned the fir cap into a hard plate helmet with built in sensors and a hard plate mask that strongly resembles a gas mask. I gave the trooper a chest rig and an updated the ppsh41 machine-gun to an energy weapon. Add the early Soviet style uniform complete with bed roll. Roll in a smattering of plate armor protecting the chest and upper arms, and viola! A Protectorate trooper. 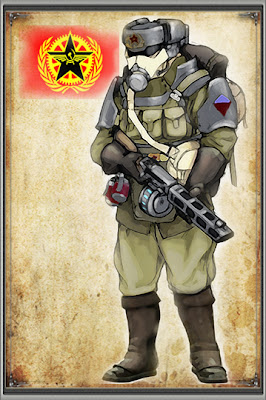 I have never considered myself a digital artist; this is perhaps the third Photoshop painting I have attempted. Although I am fairly happy with the results, when I look at the digital art floating around out there, I feel rather Meh.. about my own work. I would love to improve in this area. Perhaps someday I can head back to school to update my skills using today’s media.
Posted by Mark Mondragon at 11:45 AM 3 comments:

#2 Limited Edition Leviathan Mortis has been listed on eBay

Here is your link to the auction 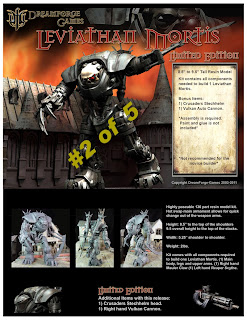 The limited Edition Mortis will only be available for a short time, likely five kits. After that the Vulkan and Crusader head will be available separately.