Some of these you have seen, others are new. This is a preview of the complete line of Eisenkern heavy troopers, with some poorly written fluff :)


I would like to encourage you to leave comments about these miniatures; this may be the last chance for changes or revisions. Anything you love, hate, or feel you would like to see.... please speak up.


I will be starting another Kickstarter project to attempt to gain funding for these miniatures. I hope to see you there and will post here and on many of the gaming news sites when this becomes available.


Here is the full squad of heavy weapons.

The heavy trooper is encased in a protective layer of armor that simply shrugs off most small arms fire. On its surface, a thin layer of IRC (Iron ring carbon atoms) provides an immense level of protection. The similarity to their large cousins the Leviathans is striking. Augmented by the same mechanical musculature of the Leviathan, the armor provides vastly improved physical strength and resilience. All of this advanced technology would be nothing without the highly trained and determined soldier that wears this armor. Only the most skilled and aggressive soldiers are recruited to the ranks of the Eisen-Jäger. All heavy troopers wear a badge of distinction, a white tunic with a black cross, harkening back to the medieval Teutonic order of knights.


Here we have one of the head swap options… Each mini will come with all three heads. The standard heavy trooper, the assault trooper and the M42 German style seen here.

This is the Grendel siege gun. 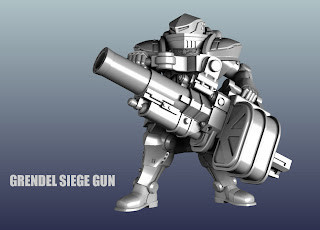 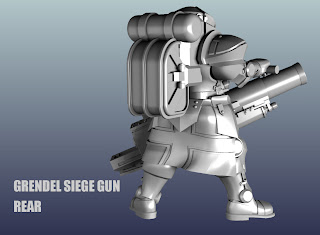 Stretching the capabilities of the power armor to move such a sizable piece, this cannon fires a fin stabilized, rocket propelled round. An initial underpowered charge launches the round from the cannon. Once the round has cleared the barrel the rocket propellant ignites and hurls the round down range.


This allows for a substantially reduced recoil transfer to the trooper, as the initial charge is only strong enough to expel the warhead thirty meters. The minimum safe distance if there is a malfunction and the rocket does not ignite. Far from accurate, the cannon is most often used for indirect fire against large fortifications. More often than not, this weapon is assigned to an assault squad as a “door opener” for the assault troops.


This is the H.E.L cannon (High Energy Laser). 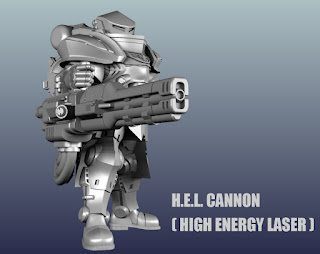 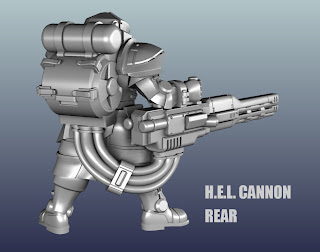 Energy weapons in the Iron Core Universe are inefficient, requiring large amounts of power from iron core reactors. The size of such a reactor is far beyond what one would consider man portable. The H.E.L. cannon are mated to an advanced capacitor that stores the energy needed to power this device. This has the disadvantage of providing a limited power supply and a limited number of shots before the capacitor runs dry. The trooper would then need to plug his capacitor into a suitable energy supply to recharge.


This is the Nova Cannon. 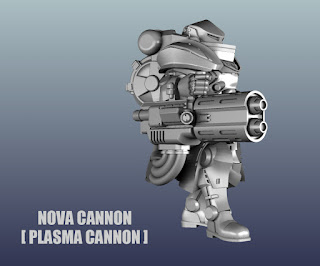 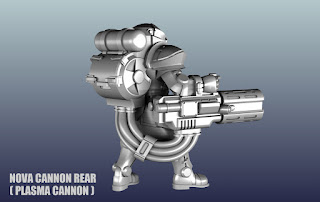 The Nova cannon is a plasma weapon. It superheats a small ball of matter to the point of becoming energy and accelerates the ball of plasma down the barrel through the use of electromagnetic coils that line the inner barrel. A devastating weapon that suffers from the same limited number of shots as is cousin the H.E.L cannon. The Nova cannon derives its name from the intense light emitted by the plasma ball, the energy thrown out is so powerful and of such a broad spectrum of visible light that it will often  burn the retinas of unprotected eyes.


This is the quad mount. 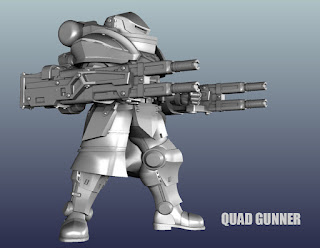 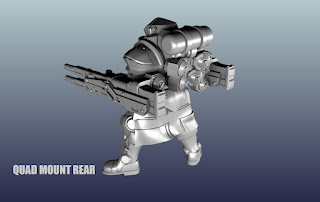 Four MG-42 variants, that have been mounted two on each arm. Particularly effective against soft skin targets and often used as air defense. This trooper’s main job is to suppress enemy units and limit the opposition’s ability to move freely.


This is the light anti-tank gun. 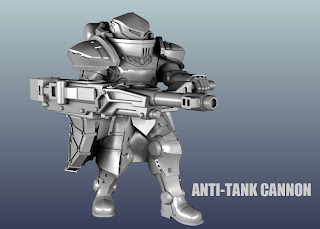 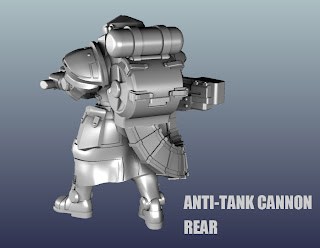 A 60mm low velocity round is fired from this short barreled cannon. Insufficient for use against heavily armored vehicles, its main purpose is to target and destroy other heavily armored troopers and light skinned vehicles.


Here we have the assault squad.

Armed with a power sword, a device that project a thin layer of energy along the length of its blade, it is more than capable of dealing with light armored vehicles and other heavily armored troops. Each member of an assault squad also carries a fully automatic grenade launcher. The recoil from this weapon is substantial, but the power armor makes control of this weapon a non-issue. Assault troopers are expected to go where angels fear to tread, without hesitation they will charge into action and through force of will, face any obstacle. 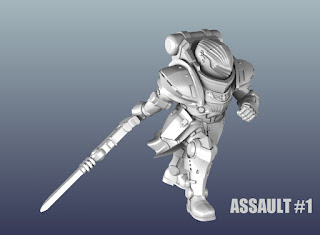 Assault trooper will have auto grenade launcher you can glue to the fig. 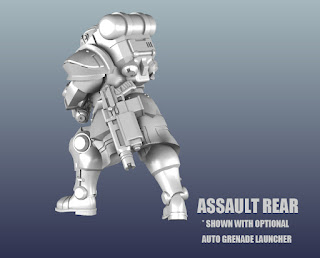 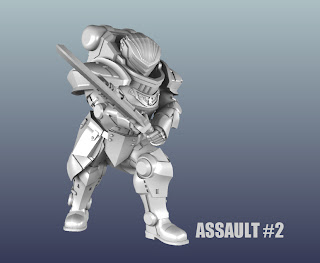 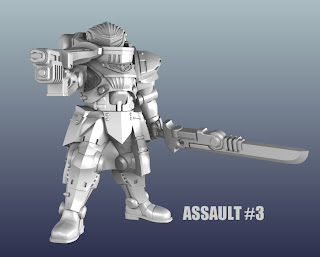 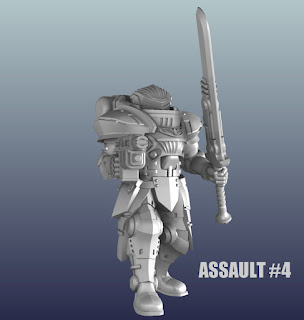 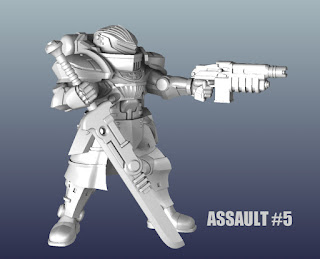