It’s all YOUR fault!

Here we have the assault squad finals, created with feedback by all of you.


Changes from the originals:
Widened stance on one of the leg sets.
Ankle armor to better ground the mini
Complete rework of the grenade launcher.
Addition of a squad leader’s sword.
Addition of an optional shield.


Taking feedback and making changes to these, took me in directions I would never have gone by myself. The vote for the grenade launcher was pretty much unanimous, as a lover of auto-feed weapons; the cylinder design was not an avenue I would have ever explored.
The sword design was so close that I needed to make the call, #1 and #2 were tied, so I stayed with what I had. The only acceptation was the addition of a squad commander’s sword to set him apart from his squad.


I would never have mated these with a shield but the folks on Dakka were pretty persistent and I am happy to oblige. This addition raised some interesting problems as the figures were not originally designed for the use of a shield. This meant I needed to affix the shield in such a way that we overcame collision issues with those massive shoulders and the large drum mag on the grenade launcher. I tried to keep the fit to the arm as tight as possible while allowing some play to be able to tilt the shield and overcome those collision issues. I also wanted to provide enough surface contact so we could avoid any pining and just use glue or green-stuff. As an optional piece you can leave it off if that is your preference.
Thank you to all who took the time to weigh in!


Next up will be the changes to the heavy weapons crew and giving those energy weapons a change to deal with that awkward left arm.
Here is the revised assault squad you helped create.

Here is the optional shield 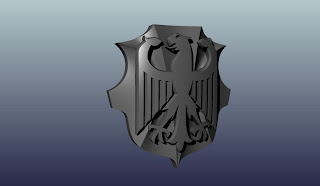 And the squad with shields equipped.

I hope you enjoy the revisions and would like to once again thank all of you for helping to shape these minis.


Back to the Sturmtruppen for a review or three:


This was a write up over at DWARTIST’S . Although he pins his minis, I have not had a need to do so
He also made a neat discovery, the plastic heads form Warlord WWII minis work rather nicely with these figs.


There is also a review over at Resin Addict. He also discusses the figures on his forum, go check them out...
Anton over at Toomuchmetal posted up a review for his Secret of the Third Reich army. You can see some nice shots next to another manufacturers minis.

I should have these up for retail sales near the end of next week; I just need to push up some shopping cart software to the website to get thing rolling.

All the best!
Mark-
Posted by Mark Mondragon at 3:18 PM