The first Leviathan Mortis has been listed on eBay 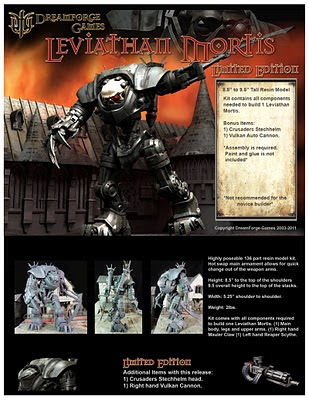 Casting took considerably longer than planned, two days of fussing with new molds and adjusting vent and sprue size. I suppose it’s to be expected but it sure is frustrating.

Because of the current production rate, I have concluded that I need to move this out of house sooner than later and will be working toward that end.

Until then I had to choose a way to sell, that would allow the greatest number of people a shot at purchasing a kit... I settled on the auction format. I know it’s not ideal and bidding may go over the suggested retail but the market supply and demand will set the price and if there is extra profit, it will go straight to the contract caster to get that end rolling.

I refuse to take pre-orders because I will not sell something that is not in a box and ready to ship.... Been there, done that, and won’t do it again. There are just too many things that can go wrong, and I would prefer not to anger my customers with unreasonable wait times.

I apologize and hope you understand my decision. If the auction format drives the price too high, I would ask for your patients while I work out the production issues. How long will it take? Likely several (2-3) months for the contract caster to start production.

Have a safe and happy New Year, and happy bidding….