This is not your grandfathers Hanomag 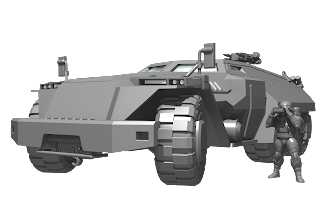 Here is a preview of the new Eisenkern APC!

This model is still a work in progress, the overall form is complete but there are a quite a few roughed in shapes and quite a bit of detailing that still needs to be done.
I thought this would be a good opportunity to go over my work flow and give you a peek into my processes.
First, I decide on a project, in this case an APC for the Eisenkern faction.
Next I think about what message I am trying to convey with the overall form of the model. In this case I wanted to bring a decidedly retro feel as I have with the Stormtroopers, this keeps the force looking cohesive on the table and allows me to draw from historic examples of vehicles for inspiration.
I then decide on a specific vehicle to work from. I have always liked the look of the Hanomag Sonderkraftfahrzeug "special purpose vehicle", or Sd.Kfz.
Not wanting to simply remake what can be found in other 1/35 scale models, I needed to examine the use in a modern battlefield and what changes would look good as well as reflect a more updated design. Halftracks are not a common occurrence on today’s battlefield, so I poured over contemporary vehicles and found that the tires now used are bullet resistant and much more suited to the task than they once were. Having a look at the Stryker APC/AFV was a nice point of inspiration. They are large wheeled vehicles, capable of carrying a large troop compliment.
The old Hanomag was tiny by comparison, so I knew we would need to drastically up-size from the original design.
I now have my muse! Having a base idea to work from, I then begin to think about what makes this thing work, what is a suitable armament for an APC and what future innovations might be found on such a vehicle.
Powerplant: Gas and diesel is too old school, so I went back to the Leviathans and pulled some reactor details to give this beast some real power under the hood. I kept some details that are important to the fluff and game, such as the reactor purge plugs that protrude from the side of the vehicle, just in front of the side doors.
Drivetrain: losing your ability to move is a great way to die, so each wheel has an independent drivetrain powered by the reactor.
Communications: Very important, the gunner doubles as a comms officer in the seat next to the driver and handles the tactical display that would project on the wind screen.
Armor: The vehicle needs to display some mass, it needs to look like it is up for the task.
Crew compartment: This is the heart and soul of any APC and their crews are its deadliest weapon. An Aliens style APC interior with safety roll bars to keep them locked into place…. This thing was designed to move and move fast. Multiple egress hatches to deploy from will help the troops hit the ground away from enemy fire.
Weapons systems: This is not an AFV (Armored Fighting Vehicle) it is a troop mover, so the armament should be defensive but effective vs. a host of enemy targets. I decided on a close infantry support weapon. If we need to hunt tanks, that’s what your infantry is for, and nothing says loving like a quad mount :)
With all those factors in mind, I get to work. I rough out a basic shape, do quite a bit of tweaking and adjust the scale to be able to fit a ten man squad, the driver and comms/gunner safely in the interior.
I continue to rough out the form until it pleases the eye. It needs to look sleek yet very robust, so I widen its wheel base.
Once I am happy with the overall form I start detailing. I pick a small section and eat the Elephant one bite at a time. I started with the wheels, then onto the power plant and finally the interior, leaving the exterior for last.


I usually let my new project name itself… spinning this model around I noticed from the front view it looked a lot like an African warthog, or boars head. I went with Keilerkopf “boar head” 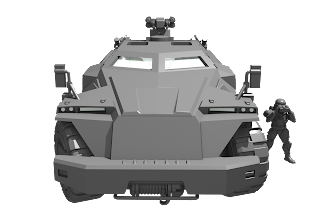 This project is about 70% done with the interior so there are still a lot of details missing from the exterior, or roughed in shapes that will need attention.
This is also the first model designed from the ground up for hard tooling, all undercuts needed to be looked after and many components separated with the manufacturing process in mind. This slows things down quite a bit. No more simply adding details simply because they look good :) I like where the overall design is going and I hope you do as well.
All the best!
-Mark 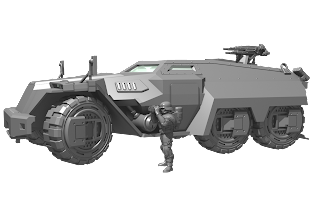 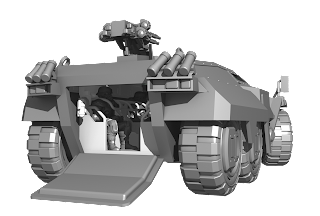 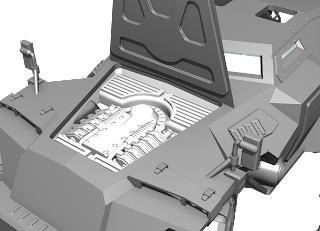 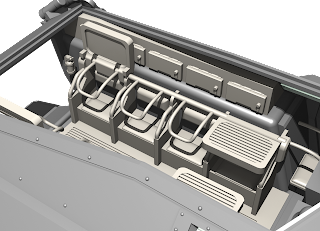 Posted by Mark Mondragon at 4:17 PM