Indulge me in a slight rant.

Please be aware the new plastic line is 31 mm to the eye of a FULLY ERECT figure, posed, they range from 28-29.75mm to the center of the eye. As the bases are thinner than most, the figures are roughly the same height as most of the major manufacturers.


The subject of scale is one that many sculptors wrestle with, I am no acceptation. The use of digital technology to sculpt a miniature provides a certain amount of freedom, the miniature looks the same to me at 15mm or 50mm scale, I can make last minute adjustments on the fly and scale the miniature to my heart’s content.
Ultimately, gamers want miniatures that look right with their other minis from manufacturer A, B or C. This is not as easy as it sounds. Place a true scale 28mm mini next to many manufacturers product and it will look small and emaciated by comparison. The whole 28mm scale convention is garbage if you ask me. Scale creep has made it useless and “heroic” scale doubly so.
I like my miniatures to be fairly well proportioned, at least looking like they could actually be humans in armor. With this in mind, I settled on 32mm scale (A man standing upright is 32mm to the eyes). I jokingly called my miniature 3B scale, “3 Bears Scale”, not too large, not too small… just right :) A nod to Goldilockss and the three bears


I call them True-32. This may be a slight misnomer, as some proportions such as shoulder width have been slightly bumped but the vast majority of the figure is a reasonable approximation of true human proportions.
“WHAT?  32mm scale? But that’s too large to work with my other minis!”


Yes and no… They are very slightly taller 33.5 total height from foot to top of head, but the proportions work well with most miniature lines and when they are in a pose that is not completely erect; they scale very well by comparison.
Here is one example of a 32mm Strumtruppen next to a “heroic” scale. You can see the arm and leg length look comparable and the body mass works well. Will this be true when compared to true 28mm scale figs? Sadly no… they will be too tall and slightly too thick by comparison.  If I was making miniatures for the historic gamer, I would take a VERY different approach. As many of the Sci-fi games have opted for 32mm true scale or “28 heroic scale, I.e. 32mm with 34mm heads, hands and feet”  I needed to make my decision based on what the customers overwhelmingly demand.  I choose 32mm true scale. It satisfies my need for some sense of proportion while allowing the miniature to be used alongside the vast majority of Sci-fi and Weird Wars games. 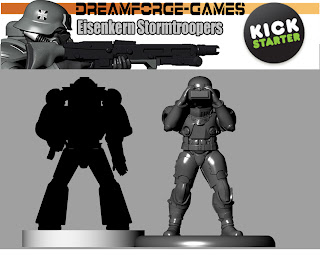 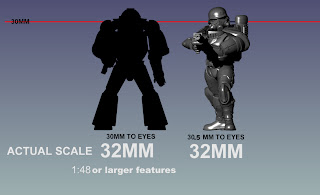 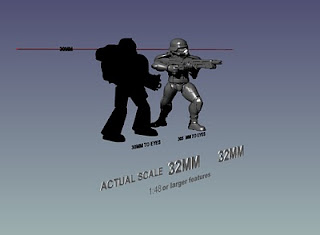 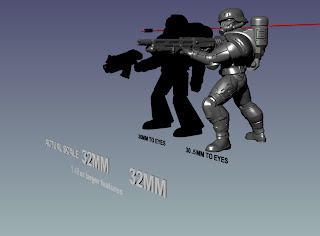 Posted by Mark Mondragon at 1:38 PM