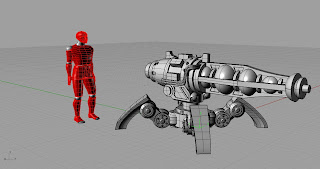 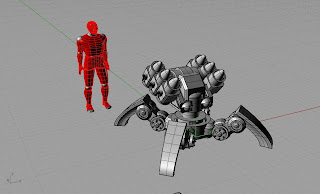 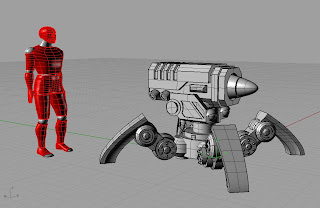 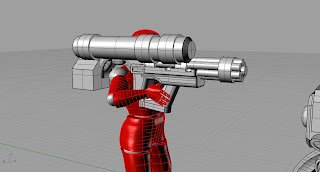 I had the opportunity to work with Chris at Outland Games.
Chris has a great sense of humor and wanted this reflected in his models.
This was a hard project for my to wrap my mind around because I'm so used to designing with a mind set that its got to look lean mean and 100% killing machine. After some back and forth I realized what he wanted and got to work. The large weapons were supposed to be on tripods and gun mounts but I wanted to add some personality and quirkiness to the design. I envisioned the weapons on robotic mounts that would wobble to the next firing position as its crew scurried to keep pace and rather than complicated fire controls on the back of the weapons, just a big red button labeled DESTROY! ;)
Chris describes his race of "Skins" as funny little aliens that use weapons that look like toys, but they are the baddest fighters around.
Ultimately I enjoyed working on this project and hope to work with Chris again to flush out some more not so serious work.

Posted by Mark Mondragon at 2:37 PM